In my last post, andante down the lazy river I mentioned that I was starting a Christmas Cantata. It’s basically done, and I’m rather pleased by the results. Of course, if I didn’t like it, it wouldn’t be done, or wouldn’t see the light of day! The reason it took so long (5 days) was that I did have to eat and sleep…not to mention make some music at church, teach an organ lesson, and do those pesky chores that just mount up and make the environs miserable until you pay attention to them…

The piece is called Songs of Prophecy. It uses 8 of the texts that Jennens, the librettist of Handel’s Messiah included in what we know as the Christmas portion. I’ve long wanted to make my own work on the whole set of Messiah texts, but wisely set a less lofty goal for this piece.

I know, you’d like examples, and I don’t have time right now. OK, here’s one score excerpt: 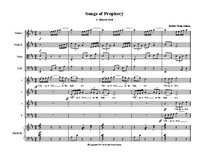 And it sounds roughly like this mp3 without any editing or real balancing of voices (the first violin is a bit shrill on my computer).

My intent was to write a piece we could use in worship, so I wanted it under 20 minutes (I’m at about 16 and a half). In addition to satb chorus, I wrote for string quartet and handbells. I was fascinated how that altered my usual textures. I tended to opt for repeated peals, open harmonies, and a good degree of pentatonic writing.

This was just plain fun to write. I couldn’t wait to get up and start writing to see how the next movement was going to come out. It has its derivative elements: African choral music, minimalism, Orff, and I also hear Adams (this Adams, that is), particularly from my Needham Psalter. The combination of chorus, strings and handbells is wonderful.

I’ll post more soon on this project. I’m preparing a table comparing the use of the texts in Handel’s piece and mine; I’d like to say something about each movement and how I felt the text flowed from movement to movement. And so on. And, as you would expect:

It’s music to my ears…

2 Responses to Songs of Prophecy