From time to time I like to comment on one of my compositions. The process gives me the opportunity to take a step back and look at the piece, and also helps me create program notes. Since the Christmas Fantasy is on the San Francisco Lyric Chorus’s upcoming concerts (December 4 and 5, 2010), this post is particularly timely.

Christmas Fantasy grew out of the process of developing the Lyric Chorus’s December 2009 program. We based our program on a list of 50 carols presented in the BBC Music Magazine. I wanted to be able to include some of the familiar carols on the list, but wished to do more with them than just sing a couple of verses and move on to the next carol–and wanted the audience to have the chance to sing. I had also been looking for a piece to end the concert, but none of the ones on the list was satisfactory. The answer was pretty obvious to me: write a piece that fulfilled these criteria.

First, a little background. To create the list, the BBC Music Magazine polled 50 choral conductors (primarily British, but including a few people across the pond…) for the five carols they most liked to include in their annual service of lessons and carols. From the 250 entries, the magazine picked the 50 most popular. As a result, in the case of some carols, like It Came Upon The Midnight Clear, tunes were picked that were more familiar to the British audience than to its American counterpart. My set begins with one of these less familiar tunes: Arthur Sullivan’s Noel. I deliberately took some time introducing this tune, so that the audience could hear it develop. As it is presented, hints (both choral and instrumental) of Richard Willis’ more familiar Carol (to American audiences, at least) appear.

The 2010 version of the Fantasy has an additional element: a brass quartet. Since our concert features music for chorus and brass, it only seemed appropriate to add the quartet to my piece. The challenge: add in the instruments in such a way that it sounds like the piece couldn’t exist without them, while at the same time NOT re-writing the choral or organ parts. In some instances, particularly when the audience sings, the brass doubles the choral harmony. In other spots, particularly those where I had the room to be more creative, the brass adds its own unique flavor. 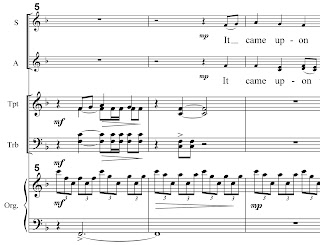 In the example, the bottom staff shows the organ part, which is the full accompaniment in the original version. I kept the organ part spare, since I fully expected that the organist would sometimes also be the director; there are spots where I wanted a hand free to give cues and set the timing. In the 2010 version, the brass fills out the organ part, adding a fanfare to the organ pedal in the first section of the piece, while at the same time giving the sopranos their opening note as well as a hint of the melody. As the section continues, the brass fanfares build on each pedal tone, providing a bridge between organ and choir.

A short organ interlude introduces the second carol, O Come, All Ye Faithful. The audience sings along with the full ensemble on verse one. The men of the chorus sing verse two while the sopranos and altos offer a descant, hinting at yet another carol (Gloria).

The third carol, The First Nowell, begins with a canonic duet between solo soprano and tenor and ends with, well, a somewhat fanciful restatement of the refrain. This is followed immediately by a verse for audience and chorus. Following this verse, my refrain returns, leading into Silent Night. A group of soloists sings verse one, as singers move into place around the audience so that all may join together on verses two and three. 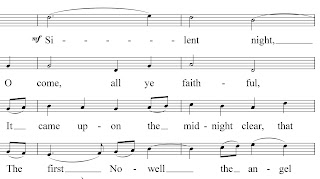 An instrumental interlude, based on Silent Night and Gloria, the tune that earlier appeared with O Come, All Ye Faithful, leads to the closing coda, with all four carols making an appearance. Ths section was perhaps the most fun to write, since Silent Night and The First Nowell are in 3, while the other carols are in 4 (note that Silent Night is presented in augmentation, while Nowell requires the singers to think in 3, while all around them the piece is in 4). It has been equally satisfying to write this piece and to work on it with the Lyric Chorus. I hope to post an excerpt, if not the full piece after our concert. If you’re in the area, come to the concert!

As a composer, it is always my hope that what I write is music to more than just my ears…