Well, if you’re going to borrow a musical idea, who better to do it from than yourself! I like to think that I’m in good company: Mozart, Bach, Handel–LOTS of Handel–and scores (pun intended) of other composers. Mark, who responded to my previous post, got me thinking along those lines–see, he suggested I post more pdfs on my website (address on sidebar); I thought of pdfs I had made recently and came upon a work based on a work based on a work–let’s see if I can explain.

At Lafayette- Orinda Presbyterian Church I had the opportunity to write for a flautist almost every month for a year or so (usually because, although she had been hired, no one had planned what she would play). One month I wrote a set of variations on Balm in Gilead. You’ll find a short description of the piece on my website, along with a link to the pdf of the full piece.

The first excerpt I’ve posted here is near the end of the second variation. One of the things I like about this variation is its extremely simple bass line (just two notes, which keep repeating, until–but you’ll have to visit my website for the rest of the story…) with a simple succession of chords in the right hand and a somewhat stream-of-consciousness meditation on the theme in the flute part. It sounds like this.

In the flute and piano variations, the variation that the first excerpt came from represented a period of rest; although it wasn’t long, it had a timeless quality about it, in the sense that it could keep going forever (I think the computer plays it faster than I would–I know; I programmed the tempo; the performer me thinks that the composer me pushes the tempo too much here–talk about being of two minds!). Where was I?

The second excerpt, a transcription of the previous variation, but now for mezzo-soprano, cello and piano, came about when I was setting some wonderful poems by my Aunt Elizabeth. I needed a time of relaxation after a particularly intense text, and happened upon my flute variation. So Gilead came into existence: a wordless song, almost a lullaby, that offers a moment of quiet and healing after the strong emotions of the previous movement. Of the five-movement set of songs (Gilead is number 4), Gilead is the only one to have been performed to date.It sounds like this. The piano part is unchanged; the soprano does the flute part, and the cello either doubles the voice or adds a countermelody.

When my cousin Michael went to Norway for the year, he took another of my pieces, a vocal duet, with him and started teaching it to a choir he is conducting for the year. He wanted me to make some minor adaptations to fit the choir, so I went farther than he asked (not an unusal happenstance) and not only modified that piece, but sent him several other works, including a choral version of Gilead (my third excerpt). 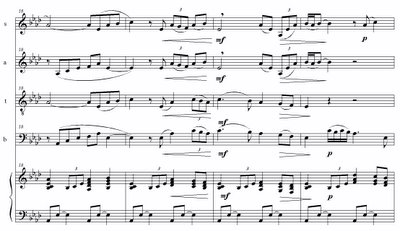 If you compare the three excerpts, you’ll notice that each adds a little more complexity, although the piano part remains constant. Much of the choral version still has the two-voice feel of its predecessor version, although there are moments, like right at the end of the excerpt, when voices become more independent. There is still no text, so it is up to the director to find a neutral syllable that works with the choir.This last excerpt sounds like this.

What I found so satisfying is that the connections to previous work actually strengthened the compositional process. It gave me an anchor, something to build from or build toward. I confess that I’ve done this a couple of other times, with similarly successful results–of course, I’m measuring success to some extent personally. Ultimate success for me comes from my audience, and how much they enjoy the music…and how much my performers (I’m often one of them) enjoy their musical experience.

After all, it’s not just music to my ears…

One Response to Borrowed Music