I’d mentioned earlier about my version of All Things Bright and Beautiful (actually the tune Royal Oak) which I had intended to play in worship. At that time I was filling in at First Congregational Church in Berkeley CA. I ended up doing my organ variations rather than the piano piece I spent time on. I played my organ variations (totally separate from the piano piece) again this morning, as part of my swan song at Lafayette-Orinda Presbyterian Church–partly because the registration I used calls for the zimbelstern (high-pitched bells) near the end–it gives the music a bit of a music-box effect. 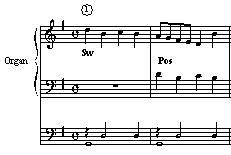 The first variation features a canon at the octave in the manuals over a simple 2-voice pedal part. I don’t yet have any soundclips to accompany my score excerpts, but I’ll add them later (it’s hard to get a good recording while everyone is talking while I’m playing). 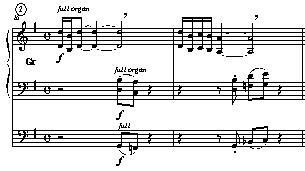 The second variation is more dramatic, with the first part of the hymn tune disguised but strongly influencing the melodic material. 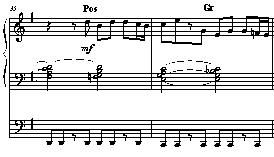 The verse portion of the tune is set in contrasting fashion: repeated bass notes, sustained left-hand chords, right hand playing with fragments of the tune. 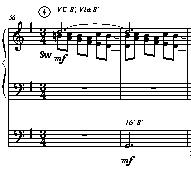 After a return to the beginning of the variation, the piece moves with a very slight break into variation 3. 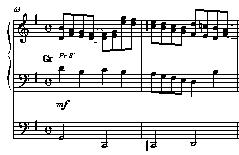 It has its own intro, which returns between phrases of the tune (ok–it’s a ritornello). 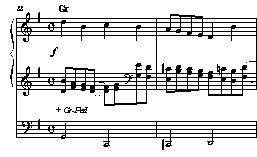 I had an 8′ Principal in mind for the left-hand melody of variation 3. It works beautifully in Vaughan Williams’ Rhosymedre. I wanted the same effect here.The right-hand material reappears in the following variation, as the hands switch material. 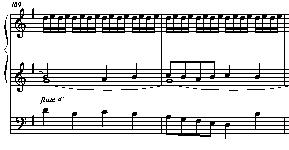 This final variation is softer: sustain notes or slow-moving lines in the left hand; repeated 16ths in the right hand; melody in the pedal on a 4′ stop. I also added the zimbelstern, since I had one on the instrument for which I wrote the piece (I may work out a handbell choir part at my new position). The piece returns to a quiet, reflective mood and prepares the congregation (those who are listening!) for worship.